SOMM Recordings is delighted to announce the second volume of Romantic Revolution, a revelatory exploration by pianist Michael Dussek of the musical relationship between his ancestor, Jan Ladislav Dussek, and Fryderyk Chopin.

Volume II focuses on music composed during the period 1789 to 1846 spanning the early years of Dussek’s compositional career and the final years of Chopin’s.

Dussek’s early Sonata in G minor (Op.10 No.2) from 1789 already shows the Bohemian composer pushing against inherited norms and reaching towards the testing of form and extreme keyboard ranges that would colour his music over the next 20 years, combining, as Dussek says in his insightful booklet notes, “virtuosic fingerwork [that] alternates with operatic dialogue”.

His Op.70 Sonata in A flat, Le retour à Paris, from 1805 “in every way breaks new ground” to produce “a thrilling tour de force setting new standards in virtuosic piano writing”. The two companion Chopin pieces – the Fantasy in F minor (Op.49) and Polonaise-Fantaisie in A flat (Op.61) – have been chosen “to emphasise the similarities of piano sonority and harmony” between the two composers.

Their inclusion points to Dussek’s guiding aim of the series: “simply to demonstrate the influence, in my view undeniable and at least partially unrecognised, of [Jan Ladislav] Dussek on the great Polish composer [Chopin]”.

Volume I of Romantic Revolution (SOMMCD 0634) met with universal acclaim, Gramophone declaring it “a fascinating exploration of music that is eminently worth a second hearing”. International Piano said: “Dussek’s music is highly imaginative and Michael Dussek is a superb advocate”.

Dussek’s previous SOMM recordings include chamber music by Frank Bridge (SOMMCD 087) and Jacques Ibert (SOMMCD 0122) with the Bridge Quartet, of which MusicWeb International said: “Michael Dussek is a doyen among the pianists who have made themselves familiar with this material”. 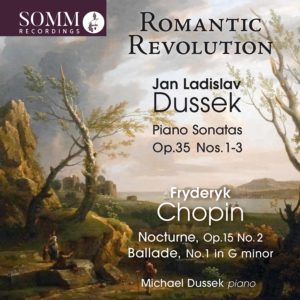 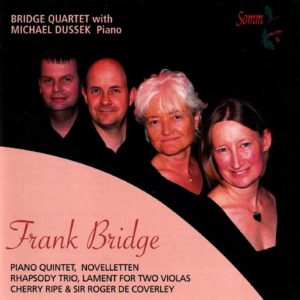