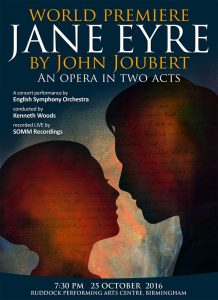 Our world premiere of John Joubert’s Opera Jane Eyre received universal acclaim. The Double CD will be out in March to coincide with John’s 90th birthday.

On 25 October 2016, Kenneth Woods and the English Symphony Orchestra gave the world- premiere performance of John Joubert’s opera Jane Eyre at the Ruddock Performing Arts Centre in Birmingham, an occasion that was universally acclaimed and is destined to be remembered for years to come. At the conclusion of the two-act opera’s concert performance, audience and musicians alike arose in a simultaneous standing ovation for the 89-year-old composer who at long last heard his magnum opus brought to life. The critics followed suit with widespread praise for the performance that was captured for posterity by the SOMM label. The live recording is scheduled to be released in March 2017 to coincide with Joubert’s 90th birthday.